Novelists have to consider the hook in almost every part of their writing. The title should hook the reader and lure him into picking up the book. The first lines of the novel should grab the reader and make him want to read more. The end of the chapter should leave the reader wanting more. If he wants to turn the page, he’s hooked and that’s where you want him to be.

I’ve talked about the hook at the beginning of the book in a few earlier posts, but I haven’t mentioned the hook that is needed at the end of a scene or chapter. We don’t want the reader putting down our book and not thinking about it ever again. Ideally we want to have them lose sleep and need to continue reading all through the night, but I’ll be satisfied if the reader thinks about my book after closing the pages to give the eyes a rest, as long as that reader picks up the book again at earliest convenience.

When I was teaching, I came across an old book I recognized in the school library discard pile. The librarian said it was being thrown out because it was hardly ever signed out. Not many pictures. Old plain cover. Not very exciting. I took that book to my class and read it to them a chapter at a time, just as my teacher had read this same book to my class when I was a student in elementary school. I remember wishing she would just keep on reading to us and never mind the lessons we needed to get on with. Why? Because the author had us hooked at the end of every chapter.

Here is the book: “The Baby Whale: Sharp Ears” by John Y. Beaty.

It is very old, and so I was not surprised to find some parts of the story not valid anymore. At one point the author says that the “sperm whale is the largest animal that has ever lived.” When I read this to my class they looked at me questioningly and said, “No, that’s not right. It’s the blue whale.” But it didn’t dampen their enthusiasm for this old book. See the age in the photo below:

The book may have contained some dated information and certainly a dated language style, but when I made adjustments for this as I read, the children in my classes were always HOOKED by the whale.

Here are some examples of the last paragraphs of chapters from this book. You can see why the children wanted me to go on reading.

So what was going to happen next time, and what would poor Sharp Ears do when he couldn’t have his mother nearby to help him? This could be so bad! We need to know more. Turn the page!

Here is another final paragraph that hooked us. 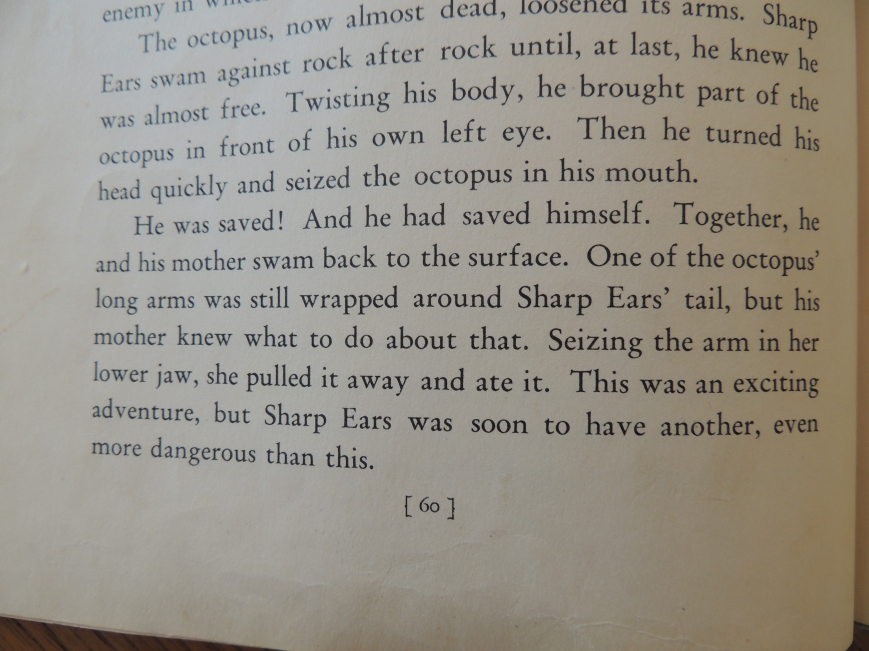 What an exciting book this was! And what could be more dangerous than this? Turn the page!

Oh no! The kids were almost in tears at the end of this chapter. Deserted by their mothers! We had to resolve this one, and quickly! I read on this time. I turned the page.

I loved this book as a child, and later, when I read this treasure to my classes, many more children were hooked by the whale.

One of my boys was so enthralled by the story that at the end of the school year, he  and his mother bought me one of the most meaningful gifts of my career. On the last day of school, he proudly presented me with a small replica of Sharp Ears. 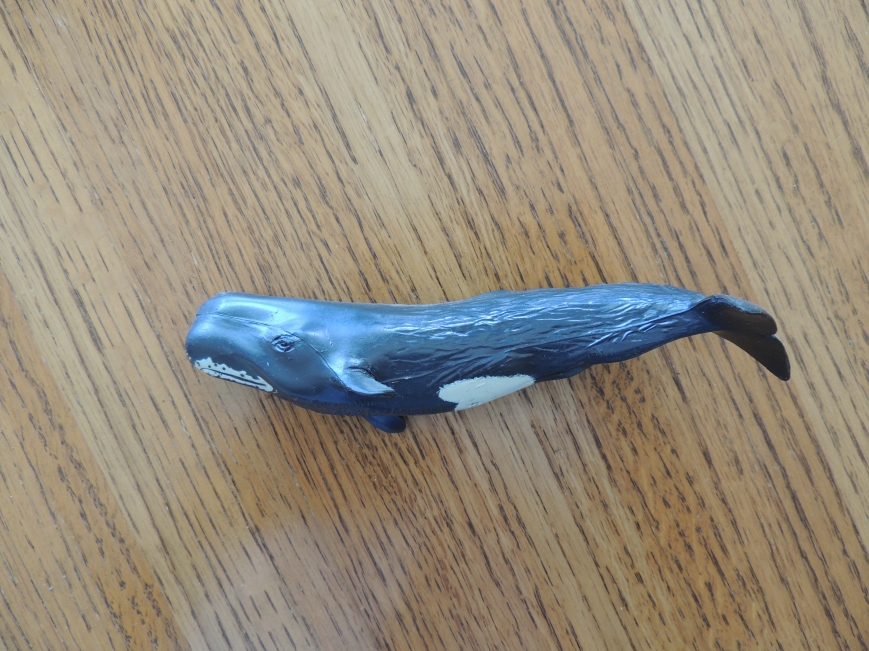 Sharp Ears sits in my kitchen window where I can see him most often. I have very fond memories of those wonderful storybook times with my classes. But one of the most important things I learned from reading to children, is valid for reading of any sort: we want to be hooked so we have a craving to know more. So writers, hook your readers!

Adventure, drama, suspense, and a trip up the coast of British Columbia — If you have not read The Wind Weeps, grab your free digital copy now on amazon or on smashwords. Follow it up with the conclusion to Andrea’s story in Reckoning Tide. Here is a sample of the beginning of Reckoning Tide.

No matter how hard.

And do as you’re told.

“Nurse!” I screamed. “Nurse, come back!” Robert’s smile vanished. He advanced and tossed the three orchids onto the foot of my bed.

I twisted around grasping for the cord with the call button. “Get away from me!” I hit the button frantically.

Robert lunged at me. “No, Andrea. Don’t!” He ripped the cord away from me. I pulled my fist back to punch him, but he was quick and caught my wrist in an iron grip. His eyes narrowed into slits.

“Nurse!” I yelled again. He clamped a hand over my mouth. Flashbacks of what that hard hand had done to me went through my mind. I bit down on his fingers, my terror lending me extra strength.

“Arrrgh! You bitch!” Robert’s eyes grew wide. He stared at me with a glassy look that I remembered too well. He drew his arm across his chest to backhand me, but dropped it when the nurse appeared.

“What’s going on here?” the nurse demanded. Margaret was a hefty woman. She filled most of the doorway as she stood with her hands on her hips. “Sir! Come away from the bed.”

“She bit me!” he said, unable to keep the whine out of his voice. “I brought her flowers—orchids, her favourite kind—and she bit me!”

I gasped at his outrageous boldfaced ploy, twisting the truth. “He tried to kill me. Don’t let him near me. He’s the one I told you about.”

“Now, Andrea.” Robert’s voice, silky smooth, sent ripples of terror up my spine. “You know that’s not true.” He turned to the nurse and slowly shook his head. “I’m her husband. You see, she’s had quite a shock. We had an argument and she set fire to our cabin and ran away when she thought I had died in the fire. I guess she’s surprised to see that I’m still alive.”

The nerve of him! I tried to get out of bed. “No! No-no-no!” I had to get the nurse to believe me. “He’s twisting it all around. He tried to kill me.”

The nurse was quick to put her hand out. “Stay in bed, Andrea.” She looked flustered and tried to calm us both. But no wonder she was confused. The whole situation was so bizarre. She looked from Robert to me and back to Robert again.

Would she side with Robert?

“Sir,” she said, “would you mind going to the waiting room down the hall? I’m sure the RCMP would like to speak with you, too. They’ll be here soon to interview Andrea.”

Robert raised his chin and gave me a smirk. “That was fast,” he said. “We’ll soon get to the bottom of the situation then.”

The nurse escorted him out the door. “We called them this morning when she woke up,” I heard her say as they walked down the hall.

The nurse had explained to me earlier that the police have to make a report in cases where there has been violence, especially since a gun was found in my fanny pack. The gun I pointed at him last week. Should have pulled the damn trigger.

You will find paperback and digital versions of Reckoning Tide on amazon outlets and on smashwords.com (for e-readers other than Kindle). Just click on the links:

For more about Anneli Purchase and her books, visit her at http://anneli-purchase.com/

Here’s Sheryl to tell introduce her newest release to us.

The Rest of My Life – When is it time to stop running?

Recommended to Choc Lit by the WH Smith Travel fiction buyer my contemporary romance novel, The Rest of My Life, is here!!

Fun, sassy and a tad naughty in places …

The Rest of My Life

“You can’t run away from commitment forever … “

Adam Hamilton-Shaw has more reason than most to avoid commitment. Living on a houseboat in the Severn Valley, his dream is to sail into the sunset – preferably with a woman waiting in every port. But lately, his life looks more like a road to destruction than an idyllic boat ride…

Would-be screenplay writer Sienna Meadows realises that everything about Adam spells trouble – but she can’t ignore the feeling that there is more to him than just his bad reputation. Nor can she ignore the intense physical attraction that exists between them.

And it just so happens that Adam sees Sienna as the kind of woman he could commit to. But can he change his damaging behaviour – or is the road to destruction a one-way street?

Fancy a peek at the video?

THE REST OF MY Life comes to you from award winning Choc Lit.